The election was held on 2 March, 1996. The Keating Labor government faced a resurgent Liberal/National opposition again led by John Howard, who had replaced Alexander Downer after Downer’s poor performance in national opinion polls.

The key issues were economic management and Keating’s leadership style. Polls showed Keating was seen as arrogant, abrasive and too focused on ‘minority’ issues such as republicanism and the arts and not the ‘big picture’. Howard focused on large

national issues, pledged to retain Medicare, privatise Telstra and protect the environment. Keating’s campaign was based on his own record and on economic management.

The Coalition returned to office in a landslide. The Liberal and National parties between them won 94 seats, reducing Labor to only 49. Three members of the ministry lost their seats. After the election, Keating resigned as Labor Leader. 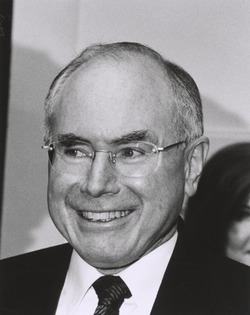 It is with an immense amount of personal pride and also an enormous amount of humility that I bring together today the essential argument as to why, after 13 long and difficult years, this nation of ours needs emphatically a change of government.

Thirteen years is a long time in anyone’s language but I don’t ask that the Government be turned out simply because it’s been in power for 13 years.

We can never build greater productivity unless we have fundamental industrial relations reform. And let me say to you that industrial relations reform so far as we are concerned is not built, as Labor lies that it is, on cutting people’s wages. They have done that over the last 13 years. Our policy is built on greater productivity, delivering higher wages and increases in real income.

I repeat we guarantee that I’ve given previously, that under a Coalition’s industrial relations policy anybody going into an Australian workplace agreement will be guaranteed the value of what they would have received if they had remained under an award in take-home pay terms.

Let me tell you a little story. It’s a story about the hard-working beef producers of Australia. A couple of years ago the Sizzler restaurant chain was contemplating buying American beef instead of Australian beef, despite the fact that the American beef was 60 per cent dearer off the hoof.

Now that is the result of the rigidities within the supply system of our economy and that is almost a parable of the heart-break of so many people, particularly in the rural industries of Australia.

I am going to establish a Small Business Deregulation Task Force and it will report to me within six months of the change of government and its brief will be to reduce the amount of regulation and rep tape enveloping small business by 50 per cent, during the first three years of government.

For small business, I also announce today that we are going to make reforms to the operation of the capital gains tax system, to make sure that it does not act as disincentive to investment and other job creating activities. We will expand the availability of roll-over relief from one like asset to another. We will extend the relief available when a house is inherited and we will provide relief where a business is sold to provide for retirement.

When I became Leader of the Opposition just over a year ago, one of the important policy areas I identified was the introduction of policies and attitudes that would strengthen the role of the family.

I think all of us recognise that apart from the other great qualities of families –- stable, united, functioning families represent the most effective welfare system that any nation can ever devise. I listen to a lot of families. I listen to a lot of people as I go around. I spend a great deal of my political time listening rather than lecturing, and the message I get from families is that they want more choice.

We need as a community to build and develop policies [inaudible] that we are living in a different era now than we were 40 to 50 years ago and the need to give families more choice, the need to give them the opportunity to more effectively blend their work and family responsibilities lies at the heart of a sensible and comprehensive family policy.

But I have believed for a long time that one of the great weaknesses in policy in relation to families in the modern Australia, is that our current taxation system does not adequately recognise the cost that we as parents all know and that is the additional cost of raising children. That is why I announce today that we will begin a greater recognition of that cost by some important changes to the taxation system which will be of direct benefit, particularly to low and middle income families.

Our changes will ensure that more of the income of families with children is tax free. We intend to raise the tax-free threshold for families, including couples and sole parents, by $100 for each dependent child under the age of 18 years. This particular initiative will be targeted at families whose taxable income is less than $70,000 a year.

This particular incentive recognises that in the 1990s the frequently desired pattern of child care on the part of many parents is a desire for at least the early years in a child’s life for one of the parents to be providing full-time child care. I should add that our policy will retain the existing child-care cash rebate which is paid through the Medicare office, and we do not propose to introduce an income test on that.

We are in the business, my friends, of providing families with more effective choice. It is for parents to decide the best caring arrangements for their children, not politicians.

My friends, one of the great features of this election campaign has been the commitment made by the Coalition parties to the future of Australia’s natural heritage. We will yield to nobody in our concern to protect Australia’s environment.

Protecting Australia’s environment has been no passing fad. It is now a permanently held value amongst all Australian irrespective of their age and I find as I go around Australia that the desire to protect and nurture our environment and to pass it on in better shape to our children and grandchildren is as deeply held amongst older Australians and amongst Australian in the rural areas of Australia as it is amongst the young, and that is why we have produced in this campaign the most comprehensive environmental package ever laid out by any political party in Australia.

We’re going to spend an additional $1.15 billion on the environment and sustainable agriculture over the next five years. That will be funded in large measure through the creation of the natural heritage trust of Australia and into that natural heritage trust we will pay $1 billion out of the sale of one-third share in Telstra.

We will commit $318 million to a national vegetation imitative, $16 million to rehabilitate the Murray-Darling basin, $80 million to protect Australia’s national reserves, and additional $279 million on Landcare and farm forestry and $100 million to clean up our coasts. Now that represents tackling the basic … ongoing environmental challenges … and I’m very pleased to announce today that out of that allocated money, that I have informed the incoming Queensland Premier, Mr Rob Borbridge that a federal Coalition government will provide up to $40 million to assist in protecting high conservation value areas in Cape York.

The Coalition has welcomed the recently signed Cape York Heads of Agreement and will support the facilitation of the relevant processes on the proviso that they involve all affected parties, including local communities, and are supported by the Queensland Government.

[We] will restore the $20 million cut made by the Keating Government to CSIRO and … in addition we will provide $90 million over three years to restore Australia’s research infrastructure.

The very last thing I want to say is that policies and programs and important commitments should be carefully made and fully honoured but the most important thing that any government can do is to build a sense of trust, a sense of integrity, a sense of honesty and a sense of commitment to the Australian people.

And one of the changes I would hope to see after three years of a coalition government is that there has been some restoration of the trust and confidence of the Australian people in the political process. Of course that means having an independent Speaker in the House of Representatives. And it also means no more rostered days off the for the prime minister. And a lot of overtime for the ministers.

Finally, my friends, it means more than that. It means that public life once again represents a covenant or an understanding between the people and those whom they elect. It’s an old truism but it’s still very relevant that governments are the servants of people. Political parties don’t exist, my party wasn’t created more than fifty years ago, and the National Party more than seventy-five years ago, to provide perks of office for its members.

We are owned by nobody. Our only desire is to be given the opportunity to build a better Australia and a better future for all Australians.