The election was held on 12 October, 1929. Billy Hughes and a number of other rebel backbenchers crossed the floor over the introduction of the Maritime Industries Bill which was designed to regulate the maritime industry. This action effectively deprived the Bruce government of a lower house majority. Bruce sought and was granted from the Governor-General the dissolution of the House of Representatives.

The election resulted in the Nationalist Party losing half of their seats. Bruce made history by becoming the only incumbent prime minister up to that point to lose his own seat. James Scullin became Prime Minister as the time of the Wall Street collapse and subsequent Depression. 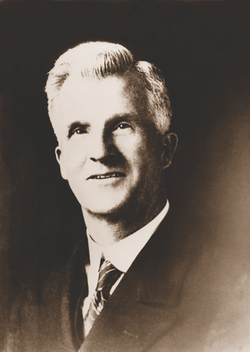 No full transcript of this speech has yet been located. The following is a press report of Scullin’s speech.

The Richmond Town Hall was crowded to the doors on Thursday night last, and an overflow meeting had to be held outside in the rain, when the Leader of the Federal Parliamentary Labor Party (Mr. Scullin) delivered his policy speech. Mr. Scullin was given an enthusiastic hearing. Many of the points he made were cheered.

Cr. H. M. Cremean, ex-Mayor of Richmond, presided and was greeted with great cheering when he introduced Mr. Scullin as the future Prime Minister of Australia.

Tonight we open what is probably the most momentous campaign in the history of this country since Federation. For nearly 30 years Australia has been writing history as a nation, and no one will deny that one of the proudest pages in our book of nationhood is that which deals with the building up of our Federal system of arbitration. An imperfect thing, perhaps, and still requiring many improvements in the light of our experience; nevertheless it has done much to improve industrial conditions. In this we have led the world. It has been a giant task. Probably there are few in this audience who remember the beginnings of it—few who remember the great men who in the early days of Federation set our feet upon the path of progress. What could these men, if they were living today, say of the attempt to undermine the whole superstructure so laboriously built up on the foundations that were laid a quarter of a century ago. The proposal you are being asked to vote for by the reactionary Ministry is nothing less than the abolition in one fell swoop of our Federal Arbitration system—the system which has grown out of the misery and oppression of the workers, the system which our fathers won for us and the humanitarian statesmen have given us, building it up, Act upon Act. Yet the Prime Minister who would do this thing professes to believe in the principle of Federal Arbitration. Because the system is not perfect, because it still needs mending, he would end it, and cast hundreds of thousands of workers into the open economic ring, where for years wage-earners fought so many unequal fights. Was there ever a greater betrayal of principle?

The Ministry claims that it has a mandate for this destructuve act. No more ridiculous, no more impudent claim was ever made. That such an attempt to bluf and hoodwink the electors of Australia should be made is an insult to the intelligence of every man and woman. It might go down with a lot of children, but not with thinking men and women. At the 1925 election, 1,500,000 electors voted for the continuance of Federal Arbitration, which was part of the Federal ministry’s policy. Not one word was said about the surrender of the powers the Commonwealth possessed—powers which have been won for the people over the last 25 years and embodied in no fewer than 15 Acts of Parliament, to which the best legal and other trained minds of the Commonwealth applied themselves with unremitting toil. At the last general election the people endorsed that policy. Amendments were still needed, as they will aways be needed so long as men are men and that divine discontent remains by which alone we may progress towards a higher and better state of things.

The Ministry brought in its Amending Act for the prevention of overlapping between Federal and State tribunals, for the correlating of the awards of the Court with economic realities, for the secret ballot and for the purpose of securing the observance of awards. It introduced new penalties. Whichever way they turned the unions and their officials were liable to run up against some penalty. The Ministry’s amending legislation was poor legislation. It was one-sided and vindictive, but such as it was it was put on the Statute Book, along with the much-vaunted and equally vindictive Transport Workers Act. It was there when the Ministry went to the country in November. Did the Prime Minister suggest that this legislation, which his Attorney-General had burnt so much midnight oil in drafting, was useless and should be scrapped? Did he in opne single speech give the lsightest hint that in his Ministry were returned to power from the last election the Commonwealth would scrap all the work of the last 25 years, abandon Arbitration and hand its powers over to the States? No, he did not! Because he did not, Parliament sent him back to the people. It is for you to say that he will never go back from the people to the Parliament as head of such a Ministry. (Applause)

Out of his own mouth

Mr Latham, in the dying hours of the last Parliament, said, as reported in Hansard:

There are those who urge that the Arbitration Court should be abolished…The abolition of the Court would not solve any problem; on the contrary, it would create new problems, without any satisfactory means of solving them. There were 149 unions representing 693,000 unionists, and 27 employers’ organisations registered under the Court, and “most of these organisations were working in peace under the awards of the Court.

This is not my statement; it is Mr. Latham’s. Mr. Bruce said:

A suggestion was made that only two industries—shipping and shearing—were the affairs of the Commonwealth. That, of course, is quite wrong. There are many other industries that are nation-wide in their ramifications.

What has happened since those statements were made? Was it the withdrawal of the john Brown prosecution? There was no difficulty in getting at the timber workers. They could not get at them fast enough, and they were fined £1,000. There was no trouble in getting at Mr. Holloway, and he was fined £50. But John Brown, the coal baron, could not be got at. It seemed strange that before the public outcry over the case of the Abraham brothers had time to die the lockout prosecution launched against this millionaire coalowner should come—and go. The timber workers’ £1,000 fine has not been collected. There is a limit, even with this Ministry. So, having got itself into a lamentable dilemma, it looks about for a means of escape. The Prime Minister and the Attorney-General suddenly veer right round and, conveniently forgetting all that they said a few short months ago, tell us they have discovered that Arbitration is a failure. Those who have had experience of the working of the Act entirely disagree with the assertion that Arbitration has failed. It was only last year, May 29, that Mr. Latham said:

The Arbitration Court is doing most useful and valuable work.

When introducing the Bill to abolish Arbitration, Mr. Bruce said:-

One of the major problems which we have to solve if we are to win substantial prosperity is how to secure an adequate return for the wages that are paid. This involves consideration of the piecework system and payment by results.

That slander upon the workers clearly indicates that the intention behind the proposed destruction of Federal Arbitration is to give an open go to employers to get more out of the workers by speeding up, lengthening hours, and reducing wages. These have ever been the methods of the sweater. Mr. Bruce denies that he believes in lower wages, but he is endeavouring to destroy the tribunal that has built up the wage to the standard it is today.

The burden of taxation recently imposed by the Bruce-Page Ministry on life assurance companies falls chiefly on the dependents of hundreds of thousands of breadwinners. Revenue duties on commodities and taxes on amusements are also spread over the mass of the people irrespective of the amount of their income. A Labor Ministry would thoroughly review the whole financial position, including the methods of raising and spending loan money. Important public works such as telephone extensions and the completion of water supply schemes will be proceeded with. Wasteful expenditure on unnecessary boards and commissions and the creation of high salaried sinecures will cease. (Cheers) Return us to power and we shall have a return to sane finance. Is Labor fit to govern? The one thing certain is that it could not possibly make a worse mess of it than the Bruce-Page Ministry. It will not be pleasant to have to take charge and clean up the mess which the Ministry has left, but somebody has to do it, and the sooner it is taken in hand the better for the country. The first thing to be done is to save Australia. Return the Labor Party to power and you will have saved that. The rest will follow.

Many of the young and happy folk who live today have no conception of the conditions of the past—and it is not a way distant past either. What do they know of the weary women who toiled in sweating dens 80 hours a week for a pittance of 12/6? What do they know of the drivers who were employed from 80 to 90 hours a week for a bare existence? Or the shearers who were paid 1d. a head for shearing sheep? All that has been altered—thanks largely to the coming of the Labor Party. A majority for the Bruce-Page Ministry at this election will be a mandate to go right on with their destructive policy. Beware of the powerful commercial and financial forces behind the Ministry that would seek to dictate the policy of the nation, and would at this time in our history put the clock back 30 years and more to repeat again the evils of the nineties. It was out of the terror and travail of those times that the Labor Party was born. These days will not return, because the people of Australia have resolved that the men who spent their lives in fighting for the righting of our wrongs shall not have fought and suffered in vain. (Cheers)

Mr. Scullin concluded his speech by recalling the bitter experience of the past in the days before Federation. What happened in the past could occur again. However, when his party reached office it would hold a referendum to enlarge the powers of the Commonwealth generally, including powers. There are no fines for the Ministry when it breaks awards. There are only fines for the workers. The Ministry is exempted, like the coal barons.

The platform was crowded with supporters of Mr. Scullin, and a motion of confidence in him was proposed by the leader of the Opposition in the State Parliament (Mr. Hogan), who said, amidst cheers, that the people of Australia would not tolerate ‘the scrapping’ of the Arbitration Court. Other speakers were Messrs. Fenton, F. Brennan, and F. Anstey, retiring members of the House of Representatives.