The election was held on 13 April, 1910. It was the first election to be held between two major parties. Again since the last election the prime ministership had changed from Deakin to Andrew Fisher who was leader of the Labor Party and back to Deakin. Deakin had managed to forge an alliance between his Protectionist Party and the Free Trade Party. The merger of the two parties which was known as Fusion effectively put an end to the prevailing three party system.

In the first election held with only two major players, the Labor Party led by Andrew Fisher won decisively in both houses of Parliament. It had won 43 seats in the House of Representatives and 18 seats in the Senate. This now gave Australia our first federal majority government. 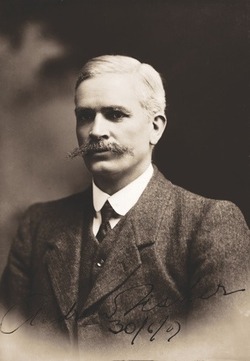 No full transcript of this speech has yet been located. The following is a press report of Fisher’s speech.

The Hon. A. Fisher, Leader of the Federal Opposition, arrived today by the 4pm train from Brisbane. He was welcomed at the station by the Mayor (Alderman C. C. M'Ghie) and prominent members of the W.P.O. Mr. Fisher addressed a public meeting this evening, in the Town Hall, which was well filled. The Mayor presided, and on the platform were Messrs. G. Ryland, C. Collins and M. A. Ferricks, M.M.L.A., Mr. M'Dowall, member for Coolgardie, Western Australia and also members identified with the local unions. A number of ladies were also on the platform.

Mr. Fisher, who, on rising, was loudly applauded, thanked the electors for the confidence they had reposed in him. He criticised Mr. Deakin for his depreciation of the Labour Party, with its policy of progress.

Labour was in Parliament for the principle of white labour and defence for Australia. In 1903 the Hon. J. C. Watson opposed successfully a proposal to subsidise the home Government for Australian defence. Defence was only effective when the money and the men were found by the country intending to defend itself.

Labour had shown how to finance old age pensions, and Mr. Deakin had never had occasion to reproach the Labour Party for unfaithfulness in its support, though he had done so. Mr. Deakin’s action would be understandable if it came from Sir George Reid, but the attack made by Mr. Deakin in opening the campaign was inexcusable.

Criticising Mr. Deakin’s statement, reported in the “Courier,” that he must pass lightly by the subject of the new protection, Mr. Fisher said there should be no industry in Australia that could not give a fair return for the capital invested by the employer, and if an industry could not pay labour a living wage, then it was not desirable to establish it. Yet this vital question was lightly passed over by Mr Deakin.

Mr Deakin’s defence policy was held up to ridicule. Mr Deakin’s idea, he said, was “to strengthen England’s naval power by the gift of a Dreadnought”. “A noble ambition!” he said in derision, “and this is a way Mr. Deakin has of cleverly putting things so as to hoodwink the people. Mr. Cook had said there were no rivers in Australia”–(laughter)–and Sir George Reid had said, “What use of the mosquito fleet proposed by the Labour Party?” Since then, Canada had adopted this same policy, and the great Sir Wilfrid Laurier, the Premier of Canada, had said, in effect, that canada’s fleet was to belong tot he people of Canada, but in case of emergency would be available for Englands’s use.

Touching on the financial question Mr. Fisher said Federation was intended to consolidate the Australian States into a Commonwealth. The difference of opinion between the Federal Government and the Labour Party touching finance was not so much question of amount as of principle. The provision made for 10 years under the so-called “Braddon Blot” he believed to be a good temporary arrangement, but a fresh basis had to be devised. It was, of course, impossible to have a strong protective tariff and a large Customs revenue at the same time. (Hear, hear) Mr. Deakin wished to increase the form of vacation that as Sir George Reid said, fell on the multitude, and he (Mr. Fisher) did not with to see this. The financial adjustment had caused much dissension, and this could not feel be avoided. Mr. Fisher urged the people to leave this financial matter to Parliament, and not to provide for it in the Constitution, because once there it could not well be removed.

Referring to land settlement and the advent of new blood which was assisting to fill up the empty spaced in the Wide Bay district. Mr. Fisher laid stress on the wisdom of preventing the introduction of aliens to destroy the purity of the Australian people. (Applause) Answering Mr. Deakin’s criticisms of Labour Party tactics in what Mr. Deakin called deserting their friends, Mr. Fisher said the party doctrine was “Those who are not with use are against us.” Mr. Deakin, the self-constituted apostle of loyalty, had fails Mr. Watson, after giving a definite promise of support, to the chagrin of Mr Watson. Other similar examples were given of Mr. Deakin’s omission to fulfil promises of support in the House.

Regarding the sugar industry Mr. Fisher said that when legislation on sugar growing first came in, only 12 per cent of cane was produced by white labour and now 90 pre cent was so produced. In concluding, Mr. Fisher said he was ready to bow to the will of the majority whether returned or rejected.

On resuming his seat Mr. Fisher was loudly applauded.

A number of questions were asked and answered.

Mr. M'Dowall also spoke. Mr. E. Demaine preposed a vote of thanks to Mr Fisher. This was scolded by Mr. C. Adams and carried with enthusiasm.